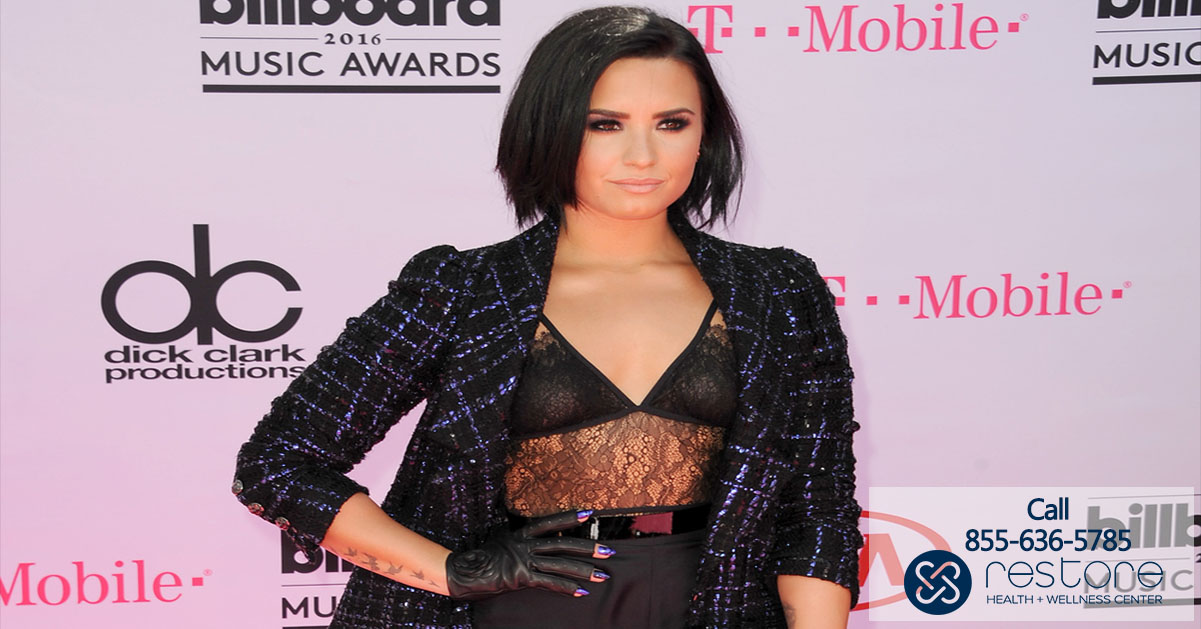 Globally acclaimed singer, songwriter, and actress Demi Lovato is celebrating 5 years of sobriety and shared her success with her fans in a public Instagram post Wednesday afternoon. Lovato, which got her start in the entertainment industry on Disney Channel shows like As the Bell Rings and Sonny with a Chance, struggled with substance abuse addiction and bipolar disorder.

On November 1st, 2010, Lovato decided to enter treatment for her drug and alcohol addiction. The trigger, many say, was an incident in which the singer reportedly punched her backup dancer, Alex Welch, after a heated confrontation on an airplane. After being confronted by her family and her management team about the situation, Demi made the decision to enter addiction treatment.

After nearly two months of treatment, Lovato returned home on January 28, 2011. After leaving treatment, she admitted publicly that she had been diagnosed with bipolar disorder during her recovery. Even with that shocking revelation, Demi’s journey in recovery would not end there. In April 2011, Lovato would become a contributing editor for Seventeen magazine, for which she wrote an article describing her problems with addiction and her path to recovery.

So grateful. It’s been quite the journey. So many ups and downs. So many times I wanted to relapse but sat on my hands and begged God to relieve the obsession. I’m so proud of myself but I couldn’t have done it without my higher power (God), my family, friends, and everyone else who supported me. Feeling humbled and joyful today. Thank you guys for sticking by my side and believing in me. ??

In January 2013, reports indicated that Lovato had been staying in a sober-living facility for more than a year in order to lessen the chance of a potential relapse. Demi’s stay might have a lot to teach us; particularly that, no matter who we are or how successful we might be, we still might need discipline, strict expectations, and a series of rules to follow during parts of our recovery. Not only has Demi Lovato exemplified many of the stages of addiction recovery, but she’s also served as role model for others due to her advocacy for those who suffer from addiction and other mental health disorders.

On the three year anniversary of her sobriety, Demi told interviewers “I wish that more people understood from a point where it’s not a choice to have an addiction… finally, I’m in a great place where I can say recovery is possible.” This year, on the 5th anniversary of her sobriety, Lovato spent the day delivering checks to LA-based charities, including those supporting education and animal rights.

Demi’s Inspiring Story is Evidence That Recovery is Process

While Lovato may be a famous artist, her recovery story is far from unique, for multiple reasons. First, she suffered from bipolar disorder, self-harming, and bulimia in addition to her drug and alcohol addiction..

Second, she stayed in a sober-living facility for a period of time after treatment. This is something that many recovery addicts do in order to reinforce their sobriety and lessen the chance of relapse.

Third, Demi says she struggled with thoughts of relapse for years after getting sober, but instead of using, she “sat on her hands and begged God to relieve the obsession.” This is especially important, as many individuals believe that once they go through a quality treatment program, they’ll no longer have the desire to use drugs and alcohol, but that isn’t the case. Instead, a quality treatment program can give an individual the tools and motivation to actively resist that desire and the power to stay sober.

Get Help for Your Substance Abuse and Addiction Like Demi Did

If you feel that your story has a lot of similarities to Demi’s, you’re not alone. Millions of women in the U.S. face problems with addiction and co-occurring mental health disorders on a daily basis. So if you have an addiction to drugs or alcohol and a co-occurring addiction like anxiety, depression, or bipolar disorder, you shouldn’t hesitate to get the help you need.

At Restore Health and Wellness Center, we don’t just treat addiction, we focus on healing the whole person. Our comprehensive women’s addiction treatment programs are tailored to fit each patient’s specific needs so they can thrive in their recovery. At Restore, we know that a patient’s recovery journey does not end the moment they finish treatment. This is why we provide aftercare services like sober living so you can continue to reinforce what you have learned during treatment, and continue to receive the support you need from our dedicated and caring staff.yea! Visit our addiction treatment center in Encnino, CA at 6918 Owensmouth Ave Canoga Park, CA 91303. 24/7 Admissions (818) 722-9019. On-Site Contact (818) 806-3914.

If you are a woman struggling with addiction, or know a woman who needs the help of a drug and alcohol treatment center, call Restore Drug Rehab today at (888) 979-4570.Verify Your Insurance Now